Oncothermia: How the method works and how it is used

Oncothermia is based on the classical method of Hyperthermia, one of the oldest cancer
treatment methods. Unlike conventional Hyperthermia, however, Oncothermia does more than
simply warm deep layers of tissue. It also combines such warming with a modulated electric
fi eld, with a carrier frequency of 13.56 MHz, that is generated by two active electrodes. A
mobile electrode is positioned in accordance with the body area being treated, while a second,
stationary electrode always remains in a fi xed position below the patient, integrated within the
therapy bed. Micro-biological tests have proven that malignant tissue has higher conductivity
than healthy human tissue. As a result, the electric fi eld tends to fl ow predominantly through
the malignant tumor tissue. This effect is referred to as “selection at the cellular level”. The
combination of deep-layer heating and the electric fi eld leads to stimulation of malignant tumor
cells. This, in turn, inhibits the natural activity of malignant cells and triggers and supports
the body‘s immune response. Malignant tumor cells then die via a process known as “apoptosis”.
Oncothermia treatment thus is based on two key effects: energy absorption and cellular-level
selection.

Hyperthermia and Oncothermia – explaining the difference

Oncothermia, a unique improvement on conventional oncological Hyperthermia, represents the
next generation of Hyperthermia therapy. It selectively destroys malignant cells by applying
the required specifi c energy dose. While traditional Hyperthermia functions solely via certain
thermodynamic parameters, such as temperature, Oncothermia functions by controlling absorbed
energy doses, via an approach similar to that used in radiation therapy. Oncothermia moves
beyond conventional heat therapies by using controlled, selective energy transfer. Oncothermia
transports energy directly to malignant cells, via a selecting electric fi eld. The therapy thus
functions in a largely apoptotic manner. The entire treatment is controlled by the modulated
electric fi eld that passes through the patient. In the process, the tumor becomes a constant,
controllable parameter within a closed electric circuit. 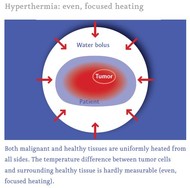 Both malignant and healthy tissues are uniformly heated from
all sides. The temperature difference between tumor cells
and surrounding healthy tissue is hardly measurable (even,
focused heating). 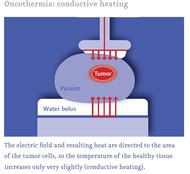 The electric fi eld and resulting heat are directed to the area
of the tumor cells, so the temperature of the healthy tissue
increases only very slightly (conductive heating). 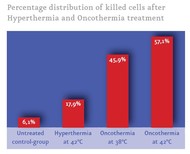 Percentage distribution of killed cells after
Hyperthermia and Oncothermia treatment

Already at a temperature of 38°C, Oncothermia therapy
yields better results than classic Hyperthermia
does even at a higher temperature of 42°C. The
number of killed cells is 2.5 times higher.

Effects at the cellular level

Oncothermia selects at the cellular level. A number of cell-culture experiments have shown that
Oncothermia has almost no impact on healthy cells; benign cell cultures with high proliferation
were found to be slightly affected. Malignant cells in cell cultures, however, are selectively
destroyed by Oncothermia. (Source: Dr. G. Brunner, Klinikum Hornheide, Clinic of Münster
University, Hyperthermia Symposium 2006, Cologne). The selection occurs as a result of special
metabolic characteristics of malignant cells (incidentally, this can also be proven by positron
emission tomography). The special feature of Oncothermia is that it promotes renewed formation
of cell connections (E-cadherin and #-catenin junctions), thereby facilitating the natural celldeath
process (apoptosis). 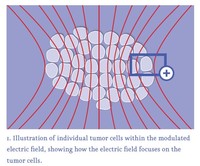 Schematic illustration of the detailed processes in the cell

4. Detail of a malignant cell membrane. As a result of the
change in the membrane potential, previously severed
cadherins within the cell membrane reconnect, and the
the membrane’s permeability and interaction between the
intracellular and extracellular domains are restored.

Hyperthermia treatment kills malignant cells largely via necrosis. In the process, toxins are
released that can burden the immune system. Oncothermia, on the other hand, harnesses
the immune system to induce apoptotic death of malignant cells. Apoptosis pathways can
be triggered and measured via ß--catenin and connexin. Apoptosis can even be retraced
morphologically, although ß--catenin is the most effi cient indicator for demonstrating natural
apoptotic change after 72 h (see illustration).

The process of apoptosis induced by Oncothermia treatment

Oncothermia treatment initiates the process of apoptosis, the programmed death of malignant cells, which can be divided into 4 different chronological phases. During the fi rst phase of apoptosis, about 1/2 hour after treatment, the cell starts to shrink; during the second phase (after about 8 hours) the nucleus condenses and cell membrane deformation starts; during the third phase (about 24 hours after treatment) the nucleus slowly begins to dissolve and fragments (apoptotic bodies) detach from the cell membrane; in the last phase of apoptosis (about 72 hours after treatment), such fragments are engulfed by phagocytes.

Synergy in a combination with conventional tumor therapies

Treatment is always focused on the specifi c patient involved, meaning that the method and the
electric fi eld are specifi cally adjusted to the patient. Oncothermia supports natural processes
of the human body (including apoptosis, immune system response …). It is complementary
to accepted conventional oncological treatment methods, it can be combined with all types of
chemotherapy and radiation therapy and it can support the pre- and post-operative phases of
surgical treatment. Oncothermia presents no risks for the patient. On the contrary: patients
tend to fi nd the treatment even pleasant. Oncothermia is not intended to serve as a sole cancer
therapy, however. It is closely oriented to conventional medical treatment and should be used in
a supporting role with such treatment. Studies have shown that a combination of Oncothermia
and radiation or chemotherapy can be highly effective, and that Oncothermia strongly enhances
the effects of such other treatments. Oncothermia 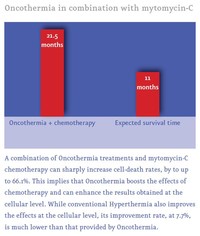 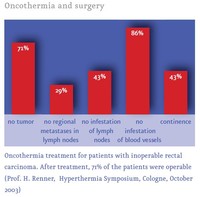 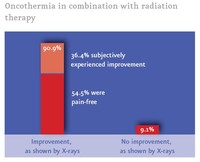 Oncothermia in combination with radiation therapy